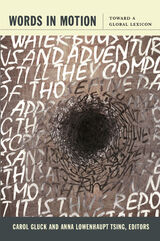 Words in Motion
Toward a Global Lexicon
Carol Gluck and Anna Lowenhaupt Tsing, eds.
Duke University Press, 2009
On the premise that words have the power to make worlds, each essay in this book follows a word as it travels around the globe and across time. Scholars from five disciplines address thirteen societies to highlight the social and political life of words in Asia, Europe, and the Middle East, from the mid-nineteenth century to the present. The approach is consciously experimental, in that rigorously tracking specific words in specific settings frequently leads in unexpected directions and alters conventional depictions of global modernity.

Such words as security in Brazil, responsibility in Japan, community in Thailand, and hijāb in France changed the societies in which they moved even as the words were changed by them. Some words threatened to launch wars, as injury did in imperial Britain’s relations with China in the nineteenth century. Others, such as secularism, worked in silence to agitate for political change in twentieth-century Morocco. Words imposed or imported from abroad could be transformed by those who wielded them to oppose the very powers that first introduced them, as happened in Turkey, Indonesia, and the Philippines. Taken together, this selection of fourteen essays reveals commonality as well as distinctiveness across modern societies, making the world look different from the interdisciplinary and transnational perspective of “words in motion.”