1 books by Abnet, Dustin A. 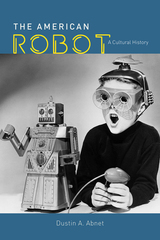 The American Robot
A Cultural History
Dustin A. Abnet
University of Chicago Press, 2020
Although they entered the world as pure science fiction, robots are now very much a fact of everyday life. Whether a space-age cyborg, a chess-playing automaton, or simply the smartphone in our pocket, robots have long been a symbol of the fraught and fearful relationship between ourselves and our creations. Though we tend to think of them as products of twentieth-century technology—the word “robot” itself dates to only 1921—as a concept, they have colored US society and culture for far longer, as Dustin A. Abnet shows to dazzling effect in The American Robot.

In tracing the history of the idea of robots in US culture, Abnet draws on intellectual history, religion, literature, film, and television. He explores how robots and their many kin have not only conceptually connected but literally embodied some of the most critical questions in modern culture. He also investigates how the discourse around robots has reinforced social and economic inequalities, as well as fantasies of mass domination—chilling thoughts that the recent increase in job automation has done little to quell. The American Robot argues that the deep history of robots has abetted both the literal replacement of humans by machines and the figurative transformation of humans into machines, connecting advances in technology and capitalism to individual and societal change. Look beneath the fears that fracture our society, Abnet tells us, and you’re likely to find a robot lurking there.
[more]