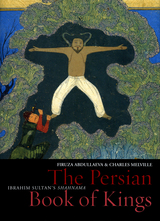 The Persian Book of Kings
Ibrahim Sultan's "Shahnama"
Firuza Abdullaeva and Charles Melville
Bodleian Library Publishing, 2008
India has the Mahabharata, Greece has Homer’s epic cycle, and the national history of Iran is chronicled in Firdausi’s epic poem The Book of Kings, or Shahnama. This lavishly illustrated study explores the intricate complexity of this epic as it is beautifully rendered in a rare fifteenth-century reproduction.
The Shahnama positions Iran at the heart of human civilization, and its sprawling and compelling narrative stretches from the beginning of time to the seventh-century takeover of the Persian Empire by Muslim Arabs. Ibrahim Sultan, governor of Shiraz in southern Iran from 1415 to 1435, commissioned an edition of the Shahnama that contained a lavish assortment of intricate original paintings. This version is now in the collection of the Bodleian Library, and The Persian Book of Kings explores this rare text in extensive detail.
The authors investigate the life of the poet Firdausi, unpack the literary context of the poem and its illuminations, and examine the royal court of Ibrahim Sultan for whom the manuscript was commissioned. The richly colored miniatures and illuminations spread through the text are given full exploration in this study, with examinations of both the artists’ techniques that influenced generations of illustrators and the artworks’ meanings. The book also features a helpful glossary of Persian terms and a list of the numerous characters that appear in the epic.
A gorgeously produced study of one of the great literary works of human history, The Persian Book of Kings offers a fascinating look at the myths and legends of an ancient culture.
[more]