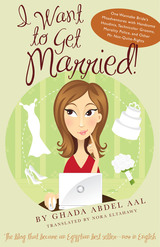 I Want to Get Married!
One Wannabe Bride’s Misadventures with Handsome Houdinis, Technicolor Grooms, Morality Police, and Other Mr. Not Quite Rights
By Ghada Abdel Aal
University of Texas Press, 2010

The rules may differ from country to country, but the dating game is a universal constant.

After years of searching for Mr. Right in living-room meetings arranged by family or friends, Ghada Abdel Aal, a young Egyptian professional, decided to take to the blogosphere to share her experiences and vent her frustrations at being young, single, and female in Egypt. Her blog, I Want to Get Married!, quickly became a hit with both men and women in the Arab world. With a keen sense of humor and biting social commentary, Abdel Aal recounts in painful detail her adventures with failed proposals and unacceptable suitors. There's Mr. Precious, who storms out during their first meeting when he feels his favorite athlete has been slighted, and another suitor who robs her in broad daylight, to name just a few of the characters she runs across in her pursuit of wedded bliss.

I Want to Get Married! has since become a best-selling book in Egypt and the inspiration for a television series. This witty look at dating challenges skewed representations of the Middle East and presents a realistic picture of what it means to be a single young woman in the Arab world, where, like elsewhere, a good man can be hard to find.