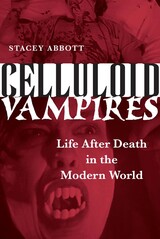 Celluloid Vampires
Life After Death in the Modern World
By Stacey Abbott
University of Texas Press, 2007

In 1896, French magician and filmmaker George Méliès brought forth the first celluloid vampire in his film Le manoir du diable. The vampire continues to be one of film's most popular gothic monsters and in fact, today more people become acquainted with the vampire through film than through literature, such as Bram Stoker's classic Dracula. How has this long legacy of celluloid vampires affected our understanding of vampire mythology? And how has the vampire morphed from its folkloric and literary origins?

In this entertaining and absorbing work, Stacey Abbott challenges the conventional interpretation of vampire mythology and argues that the medium of film has completely reinvented the vampire archetype. Rather than representing the primitive and folkloric, the vampire has come to embody the very experience of modernity. No longer in a cape and coffin, today's vampire resides in major cities, listens to punk music, embraces technology, and adapts to any situation. Sometimes she's even female.

With case studies of vampire classics such as Nosferatu, Martin, Blade, and Habit, the author traces the evolution of the American vampire film, arguing that vampires are more than just blood-drinking monsters; they reflect the cultural and social climate of the societies that produce them, especially during times of intense change and modernization. Abbott also explores how independent filmmaking techniques, special effects makeup, and the stunning and ultramodern computer-generated effects of recent films have affected the representation of the vampire in film.