1 books by Abbot William of Andres 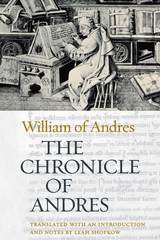 The Chronicle of Andres
Leah Abbot William of Andres
Catholic University of America Press, 2017
Translated with Notes and Commentary by Leah Shopkow

In 1220 Abbot William of Andres, a monastery halfway between Calais and Saint-Omer on the busy road from London to Paris, sat down to write an ambitious cartulary-chronicle for his monastery. Although his work was unfinished at his death, William’s account is an unpolished gem of medieval historical writing. The Chronicle of Andres details the history of his monastery from its foundation in the late eleventh century through the early part of 1234. Early in the thirteenth century, the monks decided to sue for their freedom and appointed William as their protector. His travels took him on a 4000 km, four-year journey, during which he was befriended by Innocent III, among others, and where he learned to negotiate the labyrinthine system of the ecclesiastical courts. Upon winning his case, he was elected abbot on his return to Andres and enjoyed a flourishing career thereafter. A decade after his victory, William decided to put the history of the monastery on a firm footing.

This text not only offers insight into the practice of medieval canon law (from the perspective of a well-informed man with legal training), but also ecclesiastical policies, the dynamics of life within a monastery, ethnicity and linguistic diversity, and rural life. It is comparable in its frankness to Jocelin of Brakelord’s Chronicle of Bury. Because William drew on the historiographic tradition of the Southern Low Countries, his text also offers some insights into this subject, thus composing a broad picture of the medieval European monastic world.
[more]