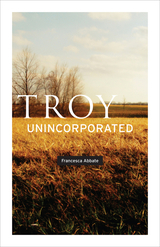 Troy, Unincorporated
Francesca Abbate
University of Chicago Press, 2012
A meditation on the nature of betrayal, the constraints of identity, and the power of narrative, the lyric monologues in Troy, Unincorporated offer a retelling, or refraction, of Chaucer’s tragedy Troilus and Criseyde. The tale’s unrooted characters now find themselves adrift in the industrialized farmlands, strip malls, and half-tenanted “historic” downtowns of south-central Wisconsin, including the real, and literally unincorporated, town of Troy. Allusive and often humorous, they retain an affinity with Chaucer, especially in terms of their roles: Troilus, the good courtly lover, suffers from the weeps, or, in more modern terms, depression. Pandarus, the hard-working catalyst who brings the lovers together in Chaucer’s poem, is here a car mechanic.
Chaucer’s narrator tells a story he didn’t author, claiming no power to change the course of events, and the narrator and characters in Troy, Unincorporated struggle against a similar predicament. Aware of themselves as literary constructs, they are paradoxically driven by the desire to be autonomous creatures—tale tellers rather than tales told. Thus, though Troy, Unincorporated follows Chaucer’s plot—Criseyde falls in love with Diomedes after leaving Troy to live with her father, who has broken his hip, and Troilus dies of a drug overdose—it moves beyond Troilus’s death to posit a possible fate for Criseyde on this “litel spot of erthe.”
[more]