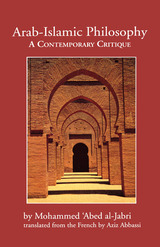 The distinguished Moroccan philosopher Mohammed Abed al-Jabri, in this summary of his own work, examines the status of Arab thought in the late twentieth century. Al-Jabri rejects what he calls the current polarization of Arab thought between an imported modernism that disregards Arab tradition and a fundamentalism that would reconstruct the present in the image of an idealized past.

Both past and present intellectual currents are examined. Al-Jabri first questions the current philosophical positions of the liberals, the Marxists, and the fundamentalists. Then he turns to history, exploring Arab philosophy in the tenth and twelfth centuries, a time of political and ideological struggle. In the writings of Ibn Hazm and Averroës, he identifies the beginnings of Arab rationalism, a rationalism he traces through the innovative fourteenth–century work of Ibn Khaldun.

Al-Jabri offers both Western readers and his own compatriots a radical new approach to Arab thought, one that finds in the past the roots of an open, critical rationalism which he sees as emerging in the Arab world today.