This international collection of essays evaluates the complete body of her work—both the acclaimed fiction and the innovative poetry. The critics represented here—American, Australian, and Canadian—address Atwood’s handling of such themes as feminism, ecology, the gothic novel, and the political relationship between Canada and the United States.

The essays on Atwood’s novels introduce the general reader to her development as a writer, as she matures from a basically subjective, poetic vision, seen in Surfacing and The Edible Woman, to an increasingly engaged, political stance, exemplified by The Handmaid’s Tale. Other essays examine Atwood’s poetry, from her transformation of the Homeric model to her criticisms of the United States’ relationship with Canada. The last two critical essays offer a unique view of Atwood through an investigation of her use of the concept of shamanism and through a presentation of eight of her vivid watercolors.

The volume ends with Atwood presenting her own views in an interview with Jan Garden Castro and in a conversation between Atwood and students at the University of Tampa, Florida. 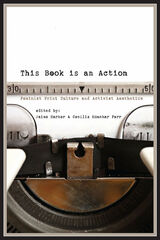 This Book Is an Action
Feminist Print Culture and Activist Aesthetics
Edited by Jaime Harker and Cecilia Konchar Farr
University of Illinois Press, 2016
The Women's Liberation Movement held a foundational belief in the written word's power to incite social change. In this new collection, Jaime Harker and Cecilia Konchar Farr curate essays that reveal how second-wave feminists embraced this potential with a vengeance. The authors in This Book Is an Action investigate the dynamic print culture that emerged as the feminist movement reawakened in the late 1960s. The works created by women shined a light on taboo topics and offered inspiring accounts of personal transformation. Yet, as the essayists reveal, the texts represented something far greater: a distinct and influential American literary renaissance. On the one hand, feminists took control of the process by building a network of publishers and distributors owned and operated by women. On the other, women writers threw off convention to venture into radical and experimental forms, poetry, and genre storytelling, and in so doing created works that raised the consciousness of a generation. Examining feminist print culture from its structures and systems to defining texts by Margaret Atwood and Alice Walker, This Book Is an Action suggests untapped possibilities for the critical and aesthetic analysis of the diverse range of literary production during feminism's second wave.
[more]