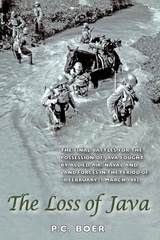 The Loss of Java explains in detail the air, sea and land battles between the Allied and Japanese armed forces during the battle for Java that followed the evacuation of southern Sumatra in February 1942. Little has been written about the allied air campaign, or about why Dutch forces fought just one major land battle with the Japanese, the Battle of the Tjiater Pass, in the later stages of the struggle.

P.C. Boer considers whether the assessment of Major General Van Oyen that deploying the Allied air forces might prevent Japanese invasion of Java was realistic, and whether reliance on air power limited the capacity of land and naval forces to repel Japan's advances. The generally accepted idea is that the Allies were ineffective in their fight against the Japanese invaders but in fact the Japanese suffered serious losses. Boer's study shows that Dutch strategy grew out of a carefully-devised plan of defense, and that the battle for Java comprised not one (the Battle of the Java Sea) but four major engagements. However, Japanese commanders at various levels consciously took steps that exposed their forces to great risk but succeeded in putting the Allies under great pressure. In the end the Royal Netherlands East Indies Army (KNIL) and the allied forces capitulated on 8 March 1942.


List of maps
List of illustrations
Preface, design of the study, aim and research questions
Introduction- the Japanese advance: Java given up by the allies

Notes
Attachment 1: Abbreviations
Attachment 2: data on the Most Important Aircraft Used
Attachment  3: Data on the composition of the most important type of KNIL Units
Bibliography
Index