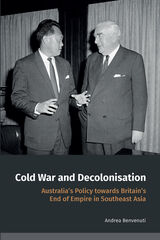 In this book, Andrea Benvenuti discusses the development of Australia’s foreign and defense policies toward Malaya and Singapore in light of the redefinition of Britain’s imperial role in Southeast Asia and the formation of new postcolonial states. Benvenuti sheds light on the impact of Britain on Australia’s political and strategic interests in Southeast Asia during the Cold War. It will be of interest to historians of Australia’s foreign relations, Southeast Asia, and the British Empire and decolonization.
AUTHOR BIOGRAPHY
Andrea Benvenuti is a senior lecturer in international relations and European studies at the School of Social Sciences, Faculty of Arts and Social Sciences at the University of New South Wales, Australia.
REVIEWS
“Benvenuti paints a careful and convincing portrait of an Australia that engaged difficult and finely balanced problems of Cold War and decolonization in Southeast Asia with sober maturity, and adjusted effectively to volatile and changing conditions. . . . An important recasting of a pivotal chapter in Cold War, Southeast Asian, and Australian history.”
— Brian P. Farrell, National University of Singapore

“Brings out well the shifts in Australian attitudes toward Britain’s approach to the decolonisation of the empire. It offers an insightful Australian view of domestic political developments in Malaya and Singapore. Its employment of Australian, British, and US sources to tell a complex story deserves praise. The work is also clearly structured and elegantly crafted.”
— Journal of Southeast Asian Studies