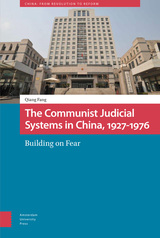 Drawing on hundreds of newly released judicial archives and court cases, this book analyzes the communist judicial system in China from its founding period to the death of Mao Zedong. It argues that the communist judicial system was built when the CCP was engaged in a life-or-death struggle with the GMD, meaning that the overriding aim of the judicial system was, from the outset, to safeguard the Party against both internal and external adversaries. This fundamental insecurity and perennial fear of loss of power obsessed the Party throughout the era of Mao and beyond, prompting it to launch numerous political campaigns, which forced communist judicial cadres to choose between upholding basic legal norms and maintaining Party order. In doing all of this, The Communist Judicial System in China, 1927-1976: Building on Fear fills a major lacuna in our understanding of communist-era China.
AUTHOR BIOGRAPHY
Dr. Qiang Fang is professor of East Asian History at the University of Minnesota Duluth. He is the President of the Chinese Historians in the United States (2017-2019) and the Executive Vice President of the Association of Chinese Professor in Social Sciences (2019-2021). He has authored and co-authored/edited several books such as A Century of Student Movements in China: The Mountain Movers (2019); Corruption and Anti-corruption in Modern China (2018); Power Versus Law in Modern China: Cities, Courts, and the Communist Party (2017); Chinese Complaint Systems: Natural Resistance Modern Chinese Legal Reform: New Perspectives (2013); Zhongguo shangfang zhidu shihua, 1100 BCE-1949 [A Short History of Chinese Petition] (2013), and Oumei xuezhe yanjiu zhongguo falushi lunwenxuanyi [Selected Translated Works of Western Studies on Chinese Legal History] (2017). In addition, he has published many articles regarding Chinese law, history, and politics in major journals such as Stanford Journal of International Law, Modern Chinese Studies, Collected Papers of History Study, Journal of Asian History, Education about Asia, and Stanford Journal of East Asian Affairs.
TABLE OF CONTENTS