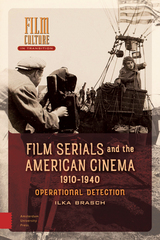 Before the advent of television, cinema offered serialized films as a source of weekly entertainment. This book traces the history from the days of silent screen heroines to the sound era's daring adventure serials, unearthing a thriving film culture beyond the self-contained feature. Through extensive archival research, Ilka Brasch details the aesthetic appeals of film serials within their context of marketing and exhibition, looking at how they adapted the pleasures of a flourishing crime fiction culture to both serial visual culture and the affordances of the media-modernity of the early 20th century. The study furthermore traces the relationship of film serials to the broadcast models of radio and television and thereby shows how film serials introduced modes of storytelling that informedpopular culture even beyond the serial's demise.
AUTHOR BIOGRAPHY
Ilka Brasch is an assistant professor of American Studies at Leibniz University of Hannover, Germany. She was a member of the research unit 'Popular Seriality - Aesthetics and Practice' (Free University Berlin, 2013-2016), and she has presented on film serials at conferences in Germany, the United States, and France. Her most recent article appeared in Screen.
TABLE OF CONTENTS


Outline 1 Introduction 2 The Operational Aesthetic 3 Film Serials Between 1910 and 1940 4 Detectives, Traces, and Repetition in The Exploits of Elaine 5 Repetition, Reiteration, and Reenactment: Operational Detection 6 Sound Serials: Media Contingency in the 1930s 7 Conclusion: Telefilm, Cross-Media Migration, and the Demise of the Film Serial 8 Works Cited