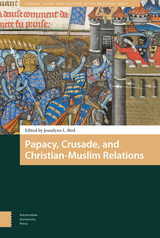 BUY
Papacy, Crusade, and Christian-Muslim Relations
edited by Jessalynn Bird and Jessalynn L. Bird
Amsterdam University Press, 2018
Cloth: 978-94-6298-631-2
eISBN: 978-90-485-3753-2
This book examines the role of the papacy and the crusade in the religious life of the late twelfth through late thirteenth centuries and beyond. Throughout the book, the contributors ask several important questions. Was Innocent III more theologian than lawyer-pope and how did his personal experience of earlier crusade campaigns inform his own vigorous promotion of the crusades? How did the outlook and policy of Honorius III differ from that of Innocent III in crucial areas including the promotion of multiple crusades (including the Fifth Crusade and the crusade of William of Montferrat) and how were both pope’s mindsets manifested in writings associated with them? What kind of men did Honorius III and Innocent III select to promote their plans for reform and crusade? How did the laity make their own mark on the crusade through participation in the peace movements which were so crucial to the stability in Europe essential for enabling crusaders to fulfill their vows abroad and through joining in the liturgical processions and prayers deemed essential for divine favor at home and abroad? Further essays explore the commemoration of crusade campaigns through the deliberate construction of physical and literary paths of remembrance. Yet while the enemy was often constructed in a deliberately polarizing fashion, did confessional differences really determine the way in which Latin crusaders and theirdescendants interacted with the Muslim world or did a more pragmatic position of ‘rough tolerance’ shape mundane activities including trade agreements and treaties?
AUTHOR BIOGRAPHY
Dr. Jessalynn L. Bird is an Assistant Professor in the Humanistic Studies program at Saint Mary’s College, Notre Dame, IN. She is co-author of Crusade and Christendom: Annotated Documents in Translation from Innocent III to the Fall of Acre, 1187-1291.
TABLE OF CONTENTS


PrefaceContributorsAbbreviationsIntroductionJessalynn BirdPeace, Crusading, and the Religious Life1. Lay Initiative in the Early Peace of God Movement Mary S. Skinner2. The Sermons of Honorius IIIIben Fonnesberg-Schmidt3. Preambles to Crusading: the arengae of Crusade letters issued by Innocent III and Honorius III Thomas W. SmithCrusades and the Islamic World4. Tolerance for the People of Antichrist: life on the frontiers of twelfth-century OutremerJay Rubenstein5. Pisan Migration Patterns along Twelfth-Century Eastern Mediterranean Trade RoutesMatthew E. Parker6. Innocent III and the Beginning of the Fourth CrusadeEdward Peters7. The Preacher and the Pope: Jacques de Vitry and the papal Curia at the time of the Fifth Crusade (1216-1227)Jan Vandeburie8. Rogations, Litanies and Crusade Preaching: The Liturgical Front in the Late Twelfth and Early Thirteenth CenturiesJessalynn Bird9. The Stones of Damietta: remembering the Fifth CrusadeMegan Cassidy-Welch10. Pro Deo et Amore Marchionis: Honorius III, William VI of Montferrat, and the Fifth Crusade in GreeceBen Halliburton11. Tribute, Islamic Law, and Diplomacy: the background to the Tunis Crusade of 1270Michael Lower