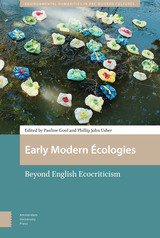 BUY
Early Modern Écologies: Beyond English Ecocriticism
edited by Pauline Goul and Pauline John Usher
Amsterdam University Press, 2020
Cloth: 978-94-6298-597-1
eISBN: 978-90-485-3721-1
Early Modern Écologies is the first collective volume to offer perspectives on the relationship between contemporary ecological thought and early modern French literature. If Descartes spoke of humans as being "masters and possessors of Nature" in the seventeenth century, the writers taken up in this volume arguably demonstrated a more complex and urgent understanding of the human relationship to our shared planet. Opening up a rich archive of literary and non-literary texts produced by Montaigne and his contemporaries, this volume foregrounds not how ecocriticism renews our understanding of a literary corpus, but rather how that corpus causes us to re-think or to nuance contemporary eco-theory. The sparsely bilingual title (an acute accent on écologies) denotes the primary task at hand: to pluralize (i.e. de-Anglophone-ize) the Environmental Humanities. Featuring established and emerging scholars from Europe and the United States, Early Modern Écologies opens up new dialogues between eco-theorists such as Timothy Morton, Gilles Deleuze, and Bruno Latour and Montaigne, Ronsard, Du Bartas, and Olivier de Serres.
AUTHOR BIOGRAPHY
Pauline Goul is Assistant Professor of French Literature at The George Washington University. She specializes in early modern French literature and environmental criticism, and she has published pieces in the *Forum for Modern Languages Studies* and in volumes like *Global Garbage* and *French Ecocriticism*. She is currently working on a monograph tentatively entitled *The Anxiety of Waste: New World, Environment and Literature in Renaissance France*. Phillip John Usher is Associate Professor of French Literature, Thought and Culture and of Comparative Literature at New York University, where he is also Chair of the Department of French Literature, Thought and Culture. He is the author, translator, or editor of nine volumes. His most recent monograph is *Exterranean: Extraction in the Humanist Anthropocene* (New York: Fordham University Press, 2019).
TABLE OF CONTENTS