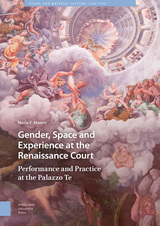 Gender, Space, and Experience at the Renaissance Court investigates the dynamic relationships between gender and architectural space in Renaissance Italy. It examines the ceremonial use and artistic reception of the Palazzo Te from the arrival of the Holy Roman Emperor Charles V in 1530 to the Sack of Mantua in 1630. This book further proposes that we conceptualise the built environment as a performative space, a space formed by the gendered relationships and actors of its time. The Palazzo Te was constituted by the gendered behaviors of sixteenth-century courtiers, but it was not simply a passive receptor of gender performance. Through its multivalent form and ceremonial function, Maria F. Maurer argues that the palace was an active participant in the construction and perception of femininity and masculinity in the early modern court.
AUTHOR BIOGRAPHY
Maria F. Maurer is an assistant professor of medieval and early modern art history at the University of Tulsa since 2013. Her PhD in the history of Italian Renaissance art from Indiana University was granted in 2012.
TABLE OF CONTENTS