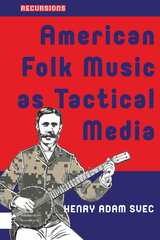 American folk music has long presented a problematic conception of authenticity, but the reality of the folk scene, and its relationship to media, is far more complicated. This book draws on the fields of media archaeology, performance studies, and sound studies to explore the various modes of communication that can be uncovered from the long American folk revival. From Alan Lomax's cybernetic visions to Bob Dylan's noisy writing machines, this book retrieves a subterranean discourse on the concept of media that might help us to reimagine the potential of the networks in which we work, play, and sing.
AUTHOR BIOGRAPHY
Henry Adam Svec completed his doctorate at the University of Western Ontario, and he has been published in the Canadian Journal of Communication, Journal of Popular Music Studies, and elsewhere. He is Assistant Professor of Communication Studies at Millsaps College in Jackson, Mississippi.
TABLE OF CONTENTS