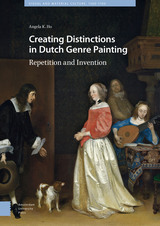 In the mid- to late seventeenth century, a number of Dutch painters created a new type of refined genre painting that was much admired by elite collectors. In this book, Angela Ho uses the examples of Gerrit Dou, Gerard ter Borch, and Frans van Mieris to show how this group of artists made creative use of repetition-such as crafting virtuosic, self-referential compositions around signature motifs, or engaging esteemed predecessors in a competitive dialogue through emulation-to project a distinctive artistic personality. The resulting paintings enabled purchasers and viewers to exercise their connoisseurial eye and claim membership in an exclusive circle of sophisticated enthusiasts-making creative repetition a successful strategy for both artists and viewers.
AUTHOR BIOGRAPHY
Angela K. Ho is Assistant Professor of Art History at George Mason University, USA.
TABLE OF CONTENTS