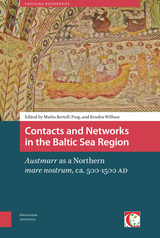 BUY
Contacts and Networks in the Baltic Sea Region: Austmarr as a northern mare nostrum, ca. 500-1500 AD
edited by Maths Bertell, Maths Frog and Kendra Willson
Amsterdam University Press, 2019
Paper: 978-94-6298-263-5
eISBN: 978-90-485-3267-4
Since prehistoric times, the Baltic Sea has functioned as a northern *mare nostrum* — a crucial nexus that has shaped the languages, folklore, religions, literature, technology, and identities of the Germanic, Finnic, Sámi, Baltic, and Slavic peoples. This anthology explores the networks among those peoples. The contributions to *Contacts and Networks in the Baltic Sea Region:* Austmarr *as a Northern* mare nostrum, *ca. 500-1500 ad* address different aspects of cultural contacts around and across the Baltic from the perspectives of history, archaeology, linguistics, literary studies, religious studies, and folklore. The introduction offers a general overview of crosscultural contacts in the Baltic Sea region as a framework for contextualizing the volume’s twelve chapters, organized in four sections. The first section concerns geographical conceptions as revealed in Old Norse and in classical texts through place names, terms of direction, and geographical descriptions. The second section discusses the movement of cultural goods and persons in connection with elite mobility, the slave trade, and rune-carving practice. The third section turns to the history of language contacts and influences, using examples of Finnic names in runic inscriptions and Low German loanwords in Finnish. The final section analyzes intercultural connections related to mythology and religion spanning Baltic, Finnic, Germanic, and Sámi cultures. Together these diverse articles present a dynamic picture of this distinctive part of the world.
AUTHOR BIOGRAPHY
[Maths Bertell](https://www.miun.se/Personal/mathsbertell/) is university lecturer in religious studies at Mid-Sweden University. He has written on Norse pre-Christian and Sámi religions and conversion in the Nordic area.[Frog](https://researchportal.helsinki.fi/en/persons/mr-frog/publications/) is an Academy of Finland Research Fellow in folklore studies at the University of Helsinki, Finland. He has published widely on poetry and mythology in Finnic and Old Norse cultures.[Kendra Willson](https://research.utu.fi/converis/portal/Person/683776?auxfun=&lang=en_GB) is a researcher in Nordic languages at the University of Turku in Finland. She works on a range of topics relating to Old Norse-Icelandic and Finnic historical linguistics and onomastics.
TABLE OF CONTENTS