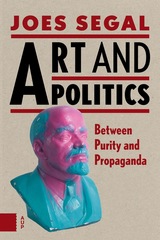 BUY
Art and Politics: Between Purity and Propaganda
by Joes Segal
Amsterdam University Press, 2016
Paper: 978-94-6298-178-2
eISBN: 978-90-485-3151-6
In Art and Politics, Segal explores the collision of politics and art in seven enticing essays. The book explores the position of art and artists under a number of different political regimes of the twentieth and twenty-first centuries, traveling around the world to consider how art and politics have interacted and influenced each other in different conditions. Joes Segal takes you on a journey to the Third Reich, where Emil Nolde supported the regime while being called degenerate; shows us Diego Rivera creating Marxist murals in Mexico and the United States for anti-Marxist governments and clients; ties Jackson Pollock's drip paintings in their Cold War context to both the FBI and the CIA; and considers the countless images of Mao Zedong in China as unlikely witnesses of radical political change.
AUTHOR BIOGRAPHY
Joes Segal is chief curator of the Wende Museum in Los Angeles and Assistant Professor of Cultural History at the University of Utrecht in the Netherlands.
TABLE OF CONTENTS


Introduction1. Positive and Negative Integration - The First World War in France and Germany2. Between Nationalism and Communism - Diego Rivera and Mexican Muralism3. National and Degenerate Art - The Third Reich4. Internal and External Enemies - The Cold War5. From Maoism to Capitalist Communism - The People's Republic of China6. The In-Between Space - Kara Walker's Shadow Murals7. A Heavy Heritage - Monuments in the former Soviet BlocConclusionNotesBibliographyIndex of Names