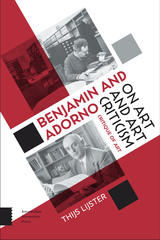 This book brings together two of the most important figures of twentieth-century criticism, Walter Benjamin and Theodor Adorno, to consider a topic that was central to their thinking: the place of and reason for art in society and culture. Thijs Lijster takes us through points of agreement and disagreement between the two on such key topics as the relationship between art and historical experience, between avant-garde art and mass culture, and between the intellectual and the public. He also addresses the continuing relevance of Benjamin and Adorno to ongoing debates in contemporary aesthetics, such as the end of art, the historical meaning of art, and the role of the critic.
AUTHOR BIOGRAPHY
Thijs Lijster teaches philosophy of art at the University of Groningen. He contributed to Conceptions of Critique in Modern and Contemporary Philosophy (eds. R. Sonderegger and K. De Boer, Palgrave 2012), Institutional Attitudes. Instituting Art in a Flat World (ed. P. Gielen, Valiz 2013) and The Encyclopedia of Aesthetics, 2nd edition (ed. M. Kelly, Oxford University Press 2014). He was awarded with the ABG/VN Essay Prize 2009, the Prize for Young Art Critics 2010 and the NWO/Boekman Dissertation Prize 2015.
TABLE OF CONTENTS


Introduction: Critique of Art1. Autonomy and Critique1.1 Introduction1.2 The birth of autonomy1.3 The artist in the marketplace1.4 Art versus society1.5 Conclusion2. Ends of Art2.1 Introduction2.2 Annihilation of semblance: Baroque allegory2.3 Allegory and commodity2.4 Proliferation of the aesthetic: technological reproducibility2.5 Adorno's dialectic of semblance2.6 Culture industry: the social liquidation of art2.7 Modernism: self-critique of semblance2.8 ConclusionExcursus I - The (N)everending StoryHegel and the beginning of the endDanto's post-historical pluralismVattimo's weak realityConclusion3. Experience, History, and Art3.1 Introduction3.2 Benjamin's concept of experience3.3 Experience and history3.4 Art history and monadology3.5 Adorno: experience and mimesis3.6 Natural history3.7 The tendency of the material and the crystallization of the monad3.8 ConclusionExcursus II - Base and Superstructure Reconsidered Struggling with a metaphorA farewell to MarxA parallax view on historical materialismConclusion4. The Art of Critique4.1 Introduction4.2 Benjamin's reading of the early German Romantics4.3 Revolutionary criticism4.4 An exemplary piece of criticism: Benjamin's Goethe essay4.5 Adorno's immanent criticism4.6 The necessity and impossibility of criticism4.7 Adorno's Mahler4.8 Conclusion Excursus III - Where is the Critic?Rise and fall of the criticWhy criticism?The critic as intellectualConclusionConclusionA distance, however closeThe 'actuality' of Benjamin and AdornoCritical modelsPost-Fordism and the new spirit of capitalismBecoming life versus resistanceAppendix - Notes on a Camp