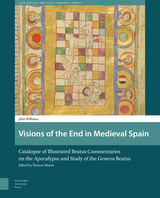 This is the first study to bring together all twenty-nine extant copies of the medieval Commentary on the Apocalypse, which was originally written by Spanish monk Beatus of Liébana. John Williams, a renowned expert on the Commentary, shares a lifetime of study and offers new insights on these strikingly illustrated manuscripts. As he shows, the Commentary responded to differing monastic needs within the shifting context of the Middle Ages. Of special interest is a discussion of the recently discovered Geneva copy: one of only three commentaries to be written outside of the Iberian Peninsula, this manuscript shows both close affinities to the Spanish model and fascinating deviations from it in terms of its script and style of illustrations.
AUTHOR BIOGRAPHY
John Williams (1928-2015) was distinguished professor emeritus of the history of art and architecture at the University of Pittsburgh. Therese Martin is a tenured scholar at the CCHS-Instituto de Historia in Madrid, currently conducting research on "Reassessing the Roles of Women as 'Makers' of Medieval Art and Architecture" with funding from the European Research Council.
TABLE OF CONTENTS


Editor's ForewordAcknowledgementsList of IllustrationsChapter 1 Visions of the End In Medieval Spain: Introductory EssayChapter 2 The Census: A Complete Register of Illustrated Beatus Commentaries and FragmentsChapter 3 Introduction to the Geneva BeatusChapter 4 Geneva Illustrations with Apocalyptic Storiae and Analyses of the ImagesAppendix Geneva Beatus Codicological Construction BibliographyIndex