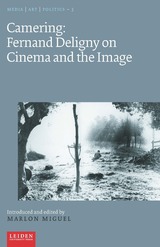 BUY
Camering: Fernand Deligny on Cinema and the Image
by Marlon Miguel
translated by Moses Sarah
Amsterdam University Press, 2022
eISBN: 978-94-006-0430-8
Fernand Deligny (1913-1996), ‘poet and ethologist’, is mostly known for his work with autistic children and for his influence on the revolutions in French post-war psychiatry. Though neither director nor a theorist of the image, cinema is constantly called into his social, pedagogical, and clinical experimentations. More interested in the processes of making, he distinguishes ‘camering’ from filming, thus emphasizing not the finished film but a ‘film to come’. This volume provides Deligny’s essential corpus on cinema and the image. It shows both the role of cameras in many of his experimental ‘attempts’ with delinquents and autistic children and his highly speculative reflections on image.
AUTHOR BIOGRAPHY
Marlon Miguel works at the project ‘Madness, Media, Milieus’ at the Bauhaus-Universität Weimar. He holds a double PhD in Fine Arts (Université Paris 8) and Philosophy (Federal University of Rio de Janeiro). He is responsible for the organization of Deligny’s archives stored at the Institut Mémoires de l’édition contemporaine.
REVIEWS
A long awaited and much-needed collection of texts that altogether propose a profound reconsideration of agency and representation through camerer. – Blandine Joret, University of Amsterdam
Ultimately, what comes most profoundly into focus through these text’s—and the meticulous scholarly framing that it is given throughout this manuscript—is the way Deligny developed an utterly original, sometimes estranging but always radically compassionate anthropology of the image, but one that unlike almost all other anthropogenic projects is organized around a fundamental questioning of the normative status of the “human” from the perspective of those humans who have been excluded from full inclusion in that category by virtue of their mental, cognitive, emotional, or psychiatric ‘deviance’ from an (ultimately imposed and artificial) norm. The consequences of such a radically reconfigured anthropology of the image for the aesthetics, poetics, and praxis of cinema is profound, and this book will enable us to finally begin to grapple with its implications.. – Leon Hilton, Brown University
TABLE OF CONTENTS