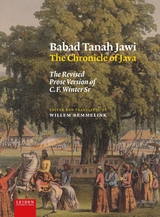 BUY
Babad Tanah Jawi, The Chronicle of Java: The Revised Prose Version of C.F. Winter Sr
by Wim Remmelink
Amsterdam University Press, 2022
eISBN: 978-94-006-0423-0
The revised prose version of the Babad Tanah Jawi was originally prepared by C.F. Winter Sr. (1799-1859), with the twofold aim of providing Javanese-language teaching material and of setting a standard for formal Javanese prose writing. At that time, Javanese was almost exclusively written in verse, which was not a medium suitable for the modern world that was dawning on Java. Although Winter achieved his aims in other ways and publications, the present text was mostly forgotten, or was just passed over as another copy of the Meinsma text (Pigeaud, Literature of Java). This was unfortunate, because it deprived linguists of one of the first attempts to create a standard Javanese prose language, and historians of a readable text that presented a Javanese view of Javanese history from the beginning until 1742. To belatedly set the record straight and to honour Winter’s contributions to the development of Javanese, the author decided to publish this text in Javanese script and provide an English translation for the general public. Although historians of Java have endeavoured to incorporate Javanese sources in their research, it remains invaluable to view that history directly through the eyes of 17th and 18th century Javanese contemporaries.
AUTHOR BIOGRAPHY
Willem Remmelink (1947) graduated in Chinese and Japanese studies from Leiden University. During a seven-year stint teaching history at Gadjah Mada University in Yogyakarta, he developed a particular interest in the early modern history of Java, which resulted in a PhD thesis on the period 1725-1743, starting with the reign of Pakubuwana II and ending with the Chinese War. Although subsequently based in Tokyo as the executive director of the former Japan-Netherlands Institute for more than twenty-five years, he kept his interest in Javanese history, especially Javanese language sources such as Babad. The present large volume is the result.
TABLE OF CONTENTS