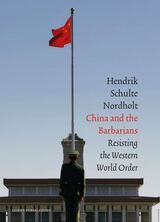 BUY
China and the Barbarians: Resisting the Western World Order
by Henk Schulte Nordholt
Amsterdam University Press, 2018
eISBN: 978-94-006-0289-2
Since times immemorial China regarded its culture, philosophy and statecraft as superior to all other nations, hence the saying Hua Yi Zhi Bian ( 華夷之辨)- China and the barbarians are different. In the so-called ‘Age of Humiliation’ (1839-1949), Western and Japanese imperialists reduced the old empire to a semi-colony. China has now regained its economic and military strength, but what drives its domestic and foreign policy? President Xi Jinping has declared that ‘Socialism with Chinese Characteristics for a New Era’ is at hand, but China can better be described as a country in search of a new identity. The philosopher Tu Weiming sees China as a battlefield of Socialism, Liberalism and Confucianism.

The outcome of this struggle will have profound repercussions. Continuation of the present policy will only lead to increased tensions with its neighbours, because the Communist Party claims that only she can restore China’s rightful position under heaven. Beijing’s land reclamation in the South China Sea and the ‘One Belt, One Road’ initiative are foremost driven by a yearning to restore the days of China’s imperial grandeur. If China choses the ‘third way’ of blending the Confucian meritocratic tradition with a western style representative government, a clash with its neighbours and the United States can be avoided.
China and the barbarians offers a fascinating insight into the thinking of China’s philosophers and powerbrokers of the past and present. Interviews with eight prominent Chinese intellectuals add an authentic ring to this book.
AUTHOR BIOGRAPHY
Hendrik Schulte Nordholt is a sinologist. He started working in 1981 as a government official promoting economic relations between the Netherlands and China. In 1985 Schulte Nordholt set up the first Dutch bank (AMRO) in China, but in 1992 he decided to ‘jump into the sea’ and with two partners established the technology company Hofung. Schulte Nord­holt has lived in China for twenty years, and frequently speaks and publishes on China.
TABLE OF CONTENTS


Contents
Prologue
Introduction
1 The Lofty Classical Order
2 The Century of Humiliation
3 A New Beginning
4 Xi Jinping Has a Dream
5 The Eternal Party
6 An Alternative to the Party?
7 The Experience of History: From Supremacy to Shame
8 Foreign Policy under Mao and Deng: From Rebellion to Harmony
9 The New Nationalism
10 The Party on a Dead-End Street
11 The Third Way
12 The World of the Great Harmony
Epilogue
Notes
Acknowledgements
Works Consulted
Index of Persons
Chinese Dynasties and Chairmen of the People’s Republic of China