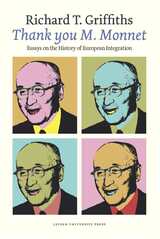 BUY
‘Thank you M. Monnet’: Essays on the History of European Integration
by Richard Griffiths
Amsterdam University Press, 2014
eISBN: 978-94-006-0107-9
This book collects contributions by Richard T. Griffiths on the history of European integration, some published for the first time in English. The essays range in chronology from the early experiences with the Marshall Plan to the difficulties and opportunities for the EFTA countries afforded by association with the EEC in the 1970s and 80s. The book interprets European integration far wider than simply the current European Union and its forerunners. Thus, it devotes chapters to EFTA, the OECD, and to issues as agriculture, cartels and monetary problems. The volume also contains the essay in the title which poses the question of what would have happened had there been no Schuman Plan back in 1950. This book should appeal to students of contemporary history, especially those interested in EU history, and to political scientists who will discover a rich palette of case studies upon which to test their theories. Its constructively critical slant on developments provides interesting perspectives to those general readers seeking a nuanced approach between the extremes of the current pro- or anti- in the debates on Europe.
AUTHOR BIOGRAPHY
Richard T. Griffiths is emeritus professor of Economic and Social History at Leiden University and former director of European Union Studies within the Humanities Faculty. He also lectures at Chulalongkorn University, Bangkok.
REVIEWS
“I have long wished that something like this would be available […] The collection is marked by an outstanding talent for disentangling complex historical processes and to illustrate key issues quite briefly. The author takes great pleasure in debunking myths, [..] and he does so with great skill and remarkably little malice.” – Professor Helge Ø. Pharo, University of Oslo.
TABLE OF CONTENTS


Contents
Introduction
1 The European Integration Experience, 1945-1958
2 The Founding Fathers
3 The Marshall Plan and Western European Reconstruction
4 The Management of Markets: Business, Governments and Cartels in Post-war Europe
5 Europe’s First Constitution: The European Political Community, 1952-1954
6 Agricultural Pressure Groups and the Origins of the Common Agricultural Policy
7 ‘Thank You, M. Monnet; I’ll Take Care of That’: Some Counterfactual Reflections on Institutional Creation and the Origins of European Integration
8 The Dynamics of Policy Inertia: The UK’s Participation in and Withdrawal from the Spaak Negotiations
9 The European Integration Experience, 1958-1973
10 ‘An Act of Creative Leadership’: The End of the OEEC and the Birth of the OECD
11 The United Kingdom and the Free Trade Area: A Post Mortem
12 ‘Two Souls, One Thought’? The EEC, the USA and the Management of the International Monetary System
13 A Dismal Decade? European Integration in the 1970s
14 EFTA and European Integration, 1973-1994: Vindication or Marginalisation?
15 The Concentric Circles of the European Union’s Trade Regime, 1989 to the Present
16 Lessons from the Euro Experience
17 European Identities
18 The Landscape of European Studies
Notes
Bibliography
Publications of Richard T. Griffiths