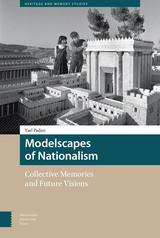 Modelscapes are clusters of miniature architectural models that represent entire environments. They're frequently found in museums as representations of heritage, architecture, and collective identity. This book offers a critical analysis of modelscapes, using case studies from Israel, to show how miniature representations of contested physical space participate in the construction of a sense of national identity and appropriation of the land and its history. What, Yael Padan asks, is the meaning of such models, and what role do they play within the context of an ongoing violent conflict over territory and history?
AUTHOR BIOGRAPHY
Dr. Yael Padan is an architect and architectural historian. She has graduated the Master Program at the Bartlett, University College London. She has completed her PhD degree at the department of Sociology and Anthropology, Ben Gurion University of the Negev, Israel.
TABLE OF CONTENTS


Introduction: Narratives into Objects, Objects into NarrativesChapter One: The Qualities of ModelscapesChapter Two: Models and Modern Perceptions of NationalismChapter Three: The Second Temple ModelChapter Four: Mini IsraelChapter Five: The Valley of the CommunitiesConclusions