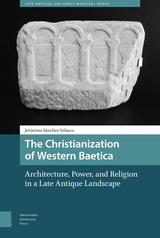 The province of Baetica, in present-day Spain, was one of the most important areas in the Roman Empire in terms of politics, economics, and culture. And in the late medieval period, it was the centre of a rich and powerful state, the Umayyad Caliphate. But the historical sources on the intervening years are limited, and we lack an accurate understanding of the evolution of the region. In recent years, however, archaeological research has begun to fill the gaps, and this book-built on more than a decade of fieldwork-provides an unprecedented overview of urban and rural development in the period.
AUTHOR BIOGRAPHY
Jerónimo Sánchez Velasco is an Honorary Senior Fellow in the Department of Prehistory and Archaeology at the University of Seville.
TABLE OF CONTENTS