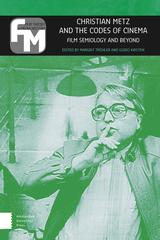 BUY
Christian Metz and the Codes of Cinema: Film Semiology and Beyond
edited by Margrit Tröhler, Guido Kirsten and Julia Zutavern
Amsterdam University Press, 2018
Paper: 978-90-8964-892-1
eISBN: 978-90-485-2756-4
A pioneering figure in film studies, Christian Metz proposed countless new concepts for reflecting on cinema, rooted in his phenomenological structuralism. He also played a key role in establishing film studies as a scholarly discipline, making major contributions to its institutionalisation in universities worldwide. This book brings together a stellar roster of contributors to present a close analysis of Metz's writings, their theoretical and epistemological positions, and their ongoing influence today.
AUTHOR BIOGRAPHY
Margrit Tröhler is a professor in the Department of Film Studies at the University of Zurich.Guido Kirsten is a postdoctoral researcher in the Department of Media Studies at Stockholm University.
TABLE OF CONTENTS