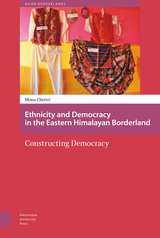 This book presents a close look at the growth, success, and proliferation of ethnic politics on the peripheries of modern South Asia, built around a case study of the Nepal ethnic group that lives in the borderlands of Sikkim, Darjeeling, and east Nepal. Grounded in historical and ethnographic research, it critically examines the relationship between culture and politics in a geographical space that is home to a diverse range of ethnic identities, showing how new modes of political representation, cultural activism, and everyday politics have emerged from the region.
AUTHOR BIOGRAPHY
Dr. Mona Chettri received her doctoral degree from the School of Oriental and African Studies, University of London in 2014. Her Ph.D dissertation focused on ethnic politics in the eastern Himalaya. She is currently working as an independent researcher on historical displacement in the Assam-Meghalaya borderland, India.
TABLE OF CONTENTS