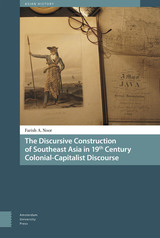 The nations of Southeast Asia today are rapidly integrating economically and politically, but that integration is also counterbalanced by forces ranging from hyper-nationalism to disputes over cultural ownership throughout the region. Those forces, Farish A. Noor argues in this book, have their roots in the region's failure to come to a critical understanding of how current national and cultural identities in the region came about. To remedy that, Noor offers a close account of the construction of Southeast Asia in the nineteenth century by the forces of capitalism and imperialism, and shows how that construct remains a potent aspect of political, economic, and cultural disputes today.
AUTHOR BIOGRAPHY
[Farish A Noor](https://www.rsis.edu.sg/profile/farish-badrol-hisham-ahmad-noor/) is Associate Professor at the S Rajaratnam School of International Studies (RSIS), Nanyang Technological University of Singapore, where he teaches the history and politics of Southeast Asia.
REVIEWS
“A truly excellent work, both insightful and highly original—a very rare text indeed.”
— Rachel Harrison, University of London

2. Booking Southeast Asia: And So It Begins, with a Nightmare
2.a Thomas de Quincey and the Malay from an Antique Land
2.b From Boemus to Theodorus de Bry and Sir Walter Raleigh: The East Indies in the Kingdom of God
2.c According to the Logic of the Modern Company: The Ordering of the East Indies by Johan Nieuhof
2.d From Nightmare to Knowledge: Coming to Know Southeast Asia

7. Crawfurd’s Burma as the Torpid ‘Land of Tyranny’
7.a Meddling with Burma: John Crawfurd and the East India Company’s ‘War on Tyranny’
7.b Snodgrass Sets the Tone: Framing Burma as Both a Threat and a Prize
7.c Weighed Down by the Maudlin Tyrant: Crawfurd’s Static Burma
7.d Now on to the Real Intelligence: Crawfurd’s Data-Gathering Mission
7.e Locating Tyranny: Crawfurd’s Mapping of Burma
7.f From Land of Tyranny to Theatre of the Grotesque
7.g And Thus Was Burma Known: Tyrants, Freaks and the Epistemic Arrest of Burma

8. Bricolage, Power and How a Region Was Discursively Constructed
8.a Books in the Era of Gunboat Epistemology
8.b Against the Coloniser’s Pen: The Internal Critique of Colonial-Capitalism
8.c ‘And Others Become Obsolete and Forgotten’: The Demise of the Language-Game of Racialised Colonial-Capitalism
8.d Conclusion: The Power behind the Idea of Southeast Asia