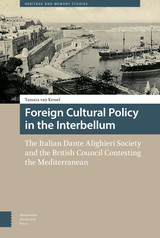 This book considers the growing awareness in the wake of World War I that culture could play an effective political role in international relations. Tamara van Kessel shows how the British created the British Council in support of those cultural aims, which took on particular urgency in light of the rise of fascist dictatorships in Europe. Van Kessel focuses in particular on the activities of the British Council and the Italian Dante Alighieri Society in the Mediterranean area, where their respective country's strategic and ideological interests most evidently clashed.
AUTHOR BIOGRAPHY
Tamara van Kessel is assistant professor in the Department of Art and Cultural Studies at the University of Amsterdam and member of the Amsterdam School for Cultural Heritage and Memory.
TABLE OF CONTENTS


IntroductionChapter 1: THE DEVELOPMENT OF FOREIGN CULTURAL POLICYChapter 2: THE DANTE ALIGHIERI SOCIETY AND THE BRITISH COUNCIL AGENCY AND INDEPENDENCEChapter 3: CONSTRUCTIONS OF 'ITALIANITÀ' AND 'BRITISHNESS'Chapter 4: THE BATTLE FOR CULTURAL HEGEMONY IN MALTAChapter 5: NATIONAL CULTURE AND IMPERIAL CONQUEST: THE DANTE ALIGHIERI SOCIETY IN ABYSSINIA AND THE BRITISH COUNCIL IN EGYPTConclusionAcknowledgementsBibliography