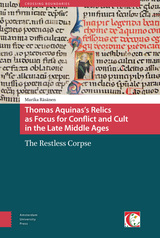 This book offers a new way of looking at Saint Thomas Aquinas-not as a living man, but as a posthumous source of relics. Marika Räsänen delves deep into the strange relationship between Aquinas's physical remains and the devotional moments they enabled-in many cases in situations where the actual relics were not present, but were recreated verbally, pictorially, or allegorically. Both the actual relics and these extended manifestations of them, Räsänen shows, were equally real to the medieval spectator, though the question of the material presence of Aquinas's remains became increasingly important over time amid the political tumult of southern Italy.
AUTHOR BIOGRAPHY
Dr Marika Räsänen , Post-doctoral research fellow at the Turku Centre for Medieval and Early Modern Studies, University of Turku.
TABLE OF CONTENTS


List of illustrationsAcknowledgementsIntroductionI The Death of Thomas, 7 March 1274II The Miraculous Body at FossanovaIII Thomas's Land - Praesentia among the FaithfulIV Written Remembrance of the RemainsConclusion: The Endless StoryAppendix: De sancto Thome de AquinoAbbreviationsBibliographyIndex