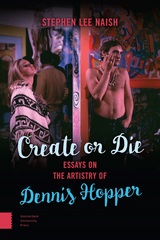 Dennis Hopper (1936-2010) was one of most charismatic and protean figures to emerge from the American independent film movement of the 1960s and '70s, an incredibly compelling screen presence who helped give cult classics like Easy Rider and Blue Velvet their off-kilter appeal. But his artistic interests went far beyond acting, and this collection of essays is the first major work to take in Hopper as a creative artist in all his fields of endeavour, from acting and directing to photography, sculpture, and expressionist painting. Stephen Naish doesn't skimp on covering Hopper's best-known work, but he breaks new ground in putting it in context with his other creative enterprises, showing how one medium informs another, and how they offer a portrait of an artist who was restless, even flawed at times, but always aiming to live up to his motto: create or die.Follow the podcasts by Steve Naish here
AUTHOR BIOGRAPHY
Stephen Lee Naish's writing explores film, politics, and popular culture and the places where they converge. His essays have appeared in numerous journals and periodicals, including the arts and culture magazines The Quietus, 3am Magazine, Empty Mirror, Gadfly, Everyday Analysis and Scholardarity. He is the author of the essay collectionU.ESS.AY: Politics and Humanity in American Film (Zer0 Books) and Create or Die: Essays on the Artistry of Dennis Hopper (Amsterdam University Press). He lives in Kingston, Ontario, Canada with his wife Jamie and their son Hayden.
TABLE OF CONTENTS


IntroductionScenes from a Revolutionary LifeHip-Hopp: Dennis Hopper and MusicThe Elephant in the Room: Dennis Hopper and American PoliticsLove and Hate: The Conflict of Emotions in The Blackout and Carried AwayCommercial Breakdown: Dennis Hopper in the World of AdvertisementsWhite Light/White Heat: Actor and Character Collide in White StarDouble Standards: The Art and Photography of Dennis HopperCoda: Breaking the Fourth Wall AcknowledgementsNotes BibliographyIndex