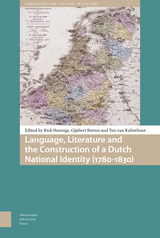 In exploring the birth of a Dutch identity between 1780 and 1830, this book integrates nationalism studies with literary and linguistic history by highlighting scholarly study of the Dutch language as a factor in the creation of the national identity. These early scholars promoted the Dutch language during a time of political upheaval, when citizens needed something to feel proud of. This book examines the impact individual agents had on a crucial stage in the Dutch nation-building process.
AUTHOR BIOGRAPHY
Rick Honings is assistant professor of Dutch studies at Leiden University and a specialist in 19th-century Dutch literature.Gijsbert Rutten is a senior researcher in historical sociolinguistics at the Leiden University Centre for Linguistics.
TABLE OF CONTENTS