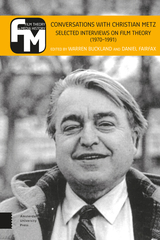 From 1968 to 1991 the acclaimed film theorist Christian Metz wrote several remarkable books on film theory: Essais sur la signifi cation au cinéma, tome1 et 2; Langage et cinéma; Le signifiant imaginaire; and L’Enonciation impersonnelle. These books set the agenda of academic film studies during its formative period. Metz’s ideas were taken up, digested, refined,reinterpreted, criticized and sometimes dismissed, but rarely ignored.This volume collects and translates into English for the first time a series of interviews with Metz, who offers readable summaries,elaborations, and explanations of his sometimes complex and demanding theories of film. He speaks informally of the most fundamental concepts that constitute the heart of film theory as an academic discipline — concepts borrowed from linguistics, semiotics, rhetoric, narratology, and psychoanalysis.Within the colloquial language of the interview, we witness Metz’s initial formation and development of his film theory. The interviewers act as curious readers who pose probing questions to Metz about his books, and seek clarification and elaboration of his key concepts. We also discover the contents of his unpublished manuscript on jokes, his relation to Roland Barthes, and the social networks operative in the French intellectual community during the 1970s and 1980s.
AUTHOR BIOGRAPHY
Warren Buckland is Reader in Film Studies at Oxford Brookes University. He is the author/editor of ten books, including The Routledge Encyclopedia of Film Theory (with Edward Branigan, 2013), Film Theory: Rational Reconstructions (2012), and The Cognitive Semiotics of Film (2000).[Daniel Fairfax](http://sensesofcinema.com/author/daniel-fairfax/") is Assistant Professor in Film Studies at the Goethe Universität (Frankfurt), having completed his PhD at Yale University, and an editor of the online film journal *Senses of Cinema*. Fairfax has overseen the publication of two recent translated works, *Cinema Against Spectacle: Technique and Ideology Revisited* by Jean-Louis Comolli (AUP, 2015), *Conversations with Christian Metz: Selected Interviews in Film Theory (1970-1991)* (AUP, 2017).
TABLE OF CONTENTS