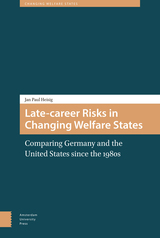 Motivated by ongoing debates over welfare state retrenchment and growing economic insecurity, this book compares the situation of older workers in Germany and the United States over the past three decades. Both nations are seeing a rise in insecurity for older workers, but the differences in support programs, pensions, and retirement options have led to differing outcomes for workers faced with early retirement or job loss.
AUTHOR BIOGRAPHY
Jan Paul Heisig is a researcher at the Wissenschaftszentrum Berlin (WZB - Berlin Social Science Center). He is the author of several research articles that have appeared in journals such as American Sociological Review and Kölner Zeitschrift für Soziologie und Sozialpsychologie.
TABLE OF CONTENTS