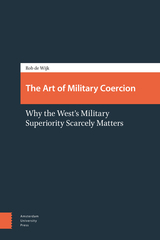 The United States spends more on its military than the rest of the world combined. And Western nations in general spend far more than developing nations around the globe. Yet when Western nations have found themselves in conflicts in recent decades, their performance has been mixed at best. In his fully updated new edition of The Art of Military Coercion, Rob de Wijk presents a theory on the use of force. He argues that the key is a failure to use force decisively, to properly understand the dynamics of conflict and balance means and ends. Without that ability, superiority of dollars, numbers, and weaponry won't necessarily translate to victory.
AUTHOR BIOGRAPHY
Rob de Wijk is the Director of the Hague Centre for Strategic Studies (HCSS) and Professor of International Relations and Security at the Campus the Hague of Leiden University. He was previously a Professor in the field of International Relations at the Royal Netherlands Military Academy and Head of the Defense Concepts Department at the Dutch Ministry of Defense.
TABLE OF CONTENTS

How this book is organized

Part I Political Culture: Why the West Coerces

1 A Western Civilization of Warriors?

A universal and superior civilization?

Democracy and the justification of interventions

The decay of the non-intervention principle

3 The Strategic Efficacy of Power Instruments

The theoretical foundation of coercion

The instruments of coercion

The dynamics of coercion

4 The Evolution of Modern Military Doctrine

The debate on active defense

Doubts about the feasibility of AirLand Battle

The doctrinal mess of the 1990s

5 Premodern Challenges and the Modern and Postmodern World

Non-state actors and the use of black holes

7 The Art of Military Coercion

The successful application of force

The principles of military operations

The timing of an intervention