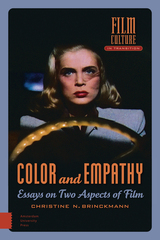 The collection of essays brings together texts from two decades, documenting two of the author's ongoing areas of interest: the poetics of colour in film as well as affective viewer responses. Employing a bottom-up approach as a basis for theoretical exploration, each of the essays concentrates on a particular film or a number of related films to come to terms with a set of issues. These include the differences between black-and-white and color works, the emergence of bold chromatic schemes in the 1950s, experimental aesthetics of color negative stock, idiosyncratic uses of colour, idiosyncratic uses of motor mimicry, genre-specific reactions to the documentary, and empathetic reactions to animals and to architecture in film.
AUTHOR BIOGRAPHY
Christine N. Brinckmannis professor emerita of the Department of Cinema Studies at the University of Zürich. She has published widely on the poetics of film, on documentary and experimental work, on narrative, and on viewer response.
REVIEWS
“It is rare to find a specialist who looks at color in so many different contexts.”
— Millennium Film Journal

“Bold. . . . Whether she is examining an art film like Claire Denis’s Beau Travail (1999), with detailed attention to Agnès Godard’s cinematographic foregrounding of the colors and textures of landscapes, objects, and architecture, or a structural film like Jenny Okun’s Still Life (1976), via its strategic and self-reflexive use of color complementarity, Brinckmann is especially alert to color’s sensual and perceptual effects in unexpected cinematic places.”
— Film Quarterly


Preface(1) Color in Film and Film Posters(2) Structural Film, Structuring Color: Jenny Okun's STILL LIFE(3) Cinematic Color, as Likeness and as Artifact(4) Chords of Color(5) The Tension of Colors in Hand-colored Silents (6) DESERT FURY: A Film Noir in Color(7) The Work of the Camera: BEAU TRAVAIL (8) Empathy with the Animal(9) Motor Mimicry in Hitchcock(10) Abstraction and Empathy in the Early German Avant-garde (11) The Role of Empathy in Documentary Film: A Case Study(12) Genre Conflicts in Tracey Emin's TOP SPOT(13) Viewer Empathy and Mosaic Structure in Frederick Wiseman's PRIMATE(14) CASTA DIVA: An Empathetic ReadingAcknowledgments