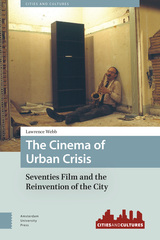 In the 1970s, cities across the United States and Western Europe faced a deep social and political crisis that challenged established principles of planning, economics and urban theory. At the same time, film industries experienced a parallel process of transition, the effects of which rippled through the aesthetic and narrative form of the decade's cinema. The Cinema of Urban Crisis traces a new path through the cinematic legacy of the 1970s by drawing together these intertwined histories of urban and cultural change. Bringing issues of space and place to the fore, the book unpacks the geographical and spatial dynamics of film movements from the New Hollywood to the New German Cinema, showing how the crisis of the seventies and the emerging 'postindustrial' economy brought film and the city together in new configurations. Chapters cover a range of cities on both sides of the Atlantic, from New York, Philadelphia and San Francisco to London, Paris and Berlin. Integrating analysis of film industries and production practices with detailed considerations of individual texts, the book offers strikingly original close analyses of a wide range of films, from New Hollywood (The Conversation, The King of Marvin Gardens, Rocky) to European art cinema (Alice in the Cities, The Passenger, Tout va Bien) and popular international genres such as the political thriller and the crime film. Focusing on the aesthetic and representational strategies of these films, the book argues that the decade's cinema engaged with - and helped to shape - the passage from the 'urban crisis' of the late sixties to the neoliberal 'urban renaissance' of the early eighties. Splicing ideas from film studies with urban geography and architectural history, the book offers a fresh perspective on a rich period of film history and opens up new directions for critical engagement between film and urban studies.
AUTHOR BIOGRAPHY
Dr Lawrence Webb is Lecturer in Film Studies at the University of Sussex.
REVIEWS
“The Cinema of Urban Crisis is instantly a classic study on the relationship between the city and the cinema. The breadth and scope of this magnificent work is remarkable; Webb . . . has a seemingly limitless knowledge of urban history, political movements and ideology, and film. . . . This is an outstanding and important work. . . . Essential.”
— Choice