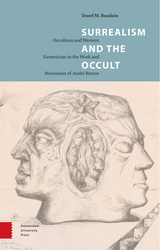 This book offers a new perspective on a long-debated issue: the role of the occult in surrealism, in particular under the leadership of French writer André Breton. Based on thorough source analysis, this study details how our understanding of occultism and esotericism, as well as of their function in Bretonian surrealism, changed significantly over time from the early 1920s to the late 1950s.
AUTHOR BIOGRAPHY
Dr Tessel M. Bauduin is a historian of art and culture. She holds a PhD in the Arts from the University of Amsterdam, and is currently affiliated with the Radboud University, Nijmegen, as a post-doctoral researcher. Her research interests include the historical avant-garde, especially Surrealism; Modernism and occulture; Modernist medievalism.
TABLE OF CONTENTS