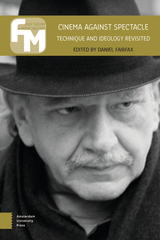 Jean-Louis Comolli’s six-part essay Technique and Ideologyhad a revolutionary effect on film theory and history when it first appeared in Cahiers du Cinéma in 1971. In 2009, Comolli revisited his earlier text, arguing that the present age, marked by the total dominance of media-filtered spectacle over image production, makes the need for an 'emancipated, critical spectator' more pressing than ever. In this volume, Daniel Fairfax presents annotated translations of these two texts to provide an overview of Comolli’s activity as both a theorist and a filmmaker.
AUTHOR BIOGRAPHY
Jean-Louis Comolli is a French writer, editor, and film director. He was editor of Cahiers du cinéma in 1965-73.[Daniel Fairfax](http://sensesofcinema.com/author/daniel-fairfax/") is Assistant Professor in Film Studies at the Goethe Universität (Frankfurt), having completed his PhD at Yale University, and an editor of the online film journal *Senses of Cinema*. Fairfax has overseen the publication of two recent translated works, *Cinema Against Spectacle: Technique and Ideology Revisited* by Jean-Louis Comolli (AUP, 2015), *Conversations with Christian Metz: Selected Interviews in Film Theory (1970-1991)* (AUP, 2017).
TABLE OF CONTENTS