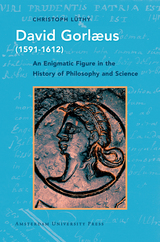 When David Gorlæus, a prospective theology student, passed away tragically at twenty-one years old, he left behind two highly innovative manuscripts, which were published posthumously in 1620 and 1651, respectively. As his identity was unknown, seventeenth-century readers understood him both as an anti-Aristotelian thinker and a precursor of Descartes. In contrast, by the twentieth century, historians depicted him as an atomist, natural scientist, and even a chemist. David Gorlæus (1591–1612) seeks to pull together what is known of this enigmatic figure. Combining multiple historical sources, Christoph Lüthy provides a narrative of Gorlæus’s life that casts light on his exceptional body of work and places it firmly at the intersection between philosophy, the nascent natural sciences, and theology.
“Christoph Lüthy is the first to tell the complete story of David Gorlæus and to reconstruct his image on the basis of all remaining sources. Showing in a convincing way that Gorlæus is one of the key figures in the renewal of atomistic philosophy in the seventeenth century and a major influence on many philosophers that are much better known, he leaves us with the melancholy picture of someone who died too young to become one of the heroes of the scientific revolution.”—Theo Verbeek, Utrecht University
AUTHOR BIOGRAPHY
Christoph Lüthy is professor of the history of philosophy and science at Radboud University Nijmegen in the Netherlands.