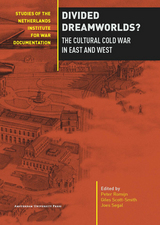 While the divide between capitalism and communism, embodied in the image of the Iron Curtain, seemed to be as wide and definitive as any cultural rift, Giles Scott-Smith, Joes Segal, and Peter Romijn have compiled a selection of essays on how culture contributed to the blurring of ideological boundaries between the East and the West. This important and diverse volume presents fascinating insights into the tensions, rivalries, and occasional cooperation between the two blocs, with essays that represent the cutting edge of Cold War Studies and analyze aesthetic preferences and cultural phenomena as various as interior design in East and West Germany; the Soviet stance on genetics; US cultural diplomacy during and after the Cold War; and the role of popular music as the universal cultural ambassador.
An illuminating and wide-ranging survey of interrelated collective dreams from both sides of the Iron Curtain, Divided Dreamworlds? has a place on the bookshelf of any modern historian.
AUTHOR BIOGRAPHY

Giles Scott-Smith is the Ernst van der Bruegel Chair in Transatlantic Diplomatic History at Leiden University and a senior researcher at the Roosevelt Study Center in Middleburg. Joes Segal is assistant professor in the Department of History and Art History at Utrecht University. Peter Romijn is Director of Research at the NIOD – Institute for War-, Holocaust-, and Genocide Studies in Amsterdam and Professor of History at the Universiteit van Amsterdam.

About the Authors
Index