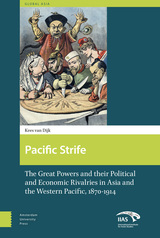 In the late 1800s and early 1900s, colonial powers clashed over much of Central and East Asia: Great Britain and Germany fought over New Guinea, the Bismarck Archipelago, Fiji, and Samoa; France and Great Britain competed over control of continental Southwest Asia; and the United States annexed the Philippines and Hawaii. Meanwhile, the possible disintegration of China and Japan’s growing nationalism added new dimensions to the rivalries. Surveying these and other international developments in the Pacific basin during the three decades preceding World War I, Kees van Dijk traces the emergence of superpowers during the colonial race and analyzes their conduct as they struggled for territory. Extensive in scope, Pacific Strife is a fascinating look at a volatile moment in history.
AUTHOR BIOGRAPHY
Kees van Dijk is emeritus professor of the history of modern Islam in Indonesia at Leiden University.
REVIEWS
“Van Dijk has mastered the narrative and relevant sources of power politics among the great powers, and includes a welcome focus on the Pacific islands and islanders and their crucial role in growing imperial rivalries. . . . [His] work will richly reward readers. . . . Highly recommended.”
— Choice