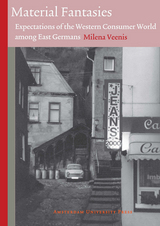 In 1989 news broadcasts all over the world were dominated for weeks by images of East Germans crossing the Berlin Wall to West Germany. But what did the East Germans expect to find when they excitedly broke through the Wall? And what did they actually find when they made it over to the other side? This study draws on fifteen months of research into both the lives of East Germans before the fall of communism and their fast-changing world after they embraced capitalism. Grounded in powerful anthropological insights, Milena Veenis argues persuasively that national identifications and the bond between state and citizenry in both East and West Germany over the past twenty years has been shaped by the far-fetched, socialist and capitalist promises of consumption as the road to ultimate well-being. These promises also functioned as a way to cover up the more shameful and dirty aspects of both countries’ history and social life.
AUTHOR BIOGRAPHY
Milena Veenis lectures anthropology at the Department of Anthropology and Sociology at the University of Amsterdam.
TABLE OF CONTENTS

1. Fieldwork
Reactions to My Presence
Material Culture and Tell-Tale One-Liners
Generalization, Differentiation
2. Germany 1945: A Country in Ruins
Material and Social Trauma
In Search of a Hold
3. The GDR: Future Promises
The Past Rewritten
A New Future: Material Well-Being
4. Material Realizations
Severe, Rational, and Centrally Planned
“Far Too Modern for Our People,” and Economic Gaps
Queuing and Mutual Equality
5.The East German Dictatorship
Theorizing Dictatorship
Local Conversations on Dictatorship
Irony, a Caring State, and the Nische
6. Silenced Pasts
Different Perspectives and Jokes about the Stasi
The Stasi’s Methods and the Taboo on More
Egalitarianism, Crab Antics, and Adjustment
7. Western Promise
Irresistible Prosperity
East Germans’ Identification with the West
The Material as Fulfillment
8. Shattered Illusions
The Wende
East Germans’ Dissatisfaction
Three Reasons for East German Despondency