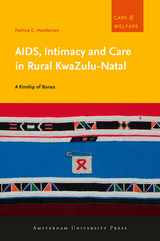 Patricia C. Henderson, a South African anthropologist, resided from March 2003 to February 2006 in Okhahlamba, a municipality in the South African province of KwaZulu-Natal. In this book, she recounts her experience among this rural population who lived under the shadow of HIV/AIDS. Spanning a period that starts before antiretrovirals were readily available to a time when these treatments were finally used to care for the ill, this powerful account of a terrible disease and the communities which it affects focuses on the ties between suffering and kinship in South Africa.
AUTHOR BIOGRAPHY
Patricia C. Henderson is a lecturer in the Department of Social Anthropology at the University of Cape Town.
TABLE OF CONTENTS

Introduction
1. The Vertiginous Body of Social Metamorphosis
The life and death of Nkosinathi Dladla
Symbolic investments in the body
Conclusion
2. Mortality and the Ethics of Ethnographic Research
In the presence of death
Theoretical pathways
Accompanying Mandla Shabalala in his illness
Conclusion
3. Children and Youth in Pursuit of Care
Introduction
The variable living circumstances of the children and youth of Amatikwe
The pain of mobility
Expressive genres
Conclusion
4. Healers Negotiating the Local and the Global
Exploring healer narratives; Ntuthuko Hadebe
Nonhlanhla Duma
Ties between the living and the dead, a conduit of knowledge
The politics of illness
Conclusion
5. Love in a Time of Adversity
Part one
Part two
Conclusion
6. On Accompanying the Ill
Zinhle Vilikazi
Life experience and philosophy in relation to becoming a volunteer
Home-based carers as brokers
The illegal sale of medication from a public health facility
Beginning a journey with antiretroviral therapies
Conclusion
Epilogue