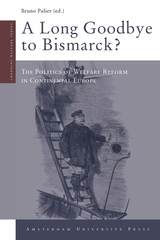 A Long Goodbye to Bismarck? is the first study to provide an exhaustive comparative account of all welfare reforms in continental Europe during the past three decades, covering Austria, Belgium, the Czech Republic, France, Germany, Hungary, Italy, the Netherlands, Poland, Slovakia, Spain, and Switzerland.

Bruno Palier is CNRS researcher at the Fondation nationale des sciences politiques in Paris and scientific coordinator of the European Network of Excellence, Reconciling Work and Welfare in Europe.

REVIEWS
“I can think of few edited volumes that manage so successfully to furnish the reader with rich detail and holism all at once. And not least, these contributions to our never-ending concern with the welfare state provide interesting reading, indeed.” Professor Gosta Esping-Andersen Pompeu University, Barcelona

"This volume represents the best available scholarship in comparative socio-economic research” “A must read." Fritz Scharpf, Emeritus Director, Max Planck Institute for the Studies of Societies


“The contributors to the volume are all recognized experts in their field and provide strictly comparable analyses in their chapters, making this volume a goldmine for comparative welfare state scholars. Palier’s study is certain to become a benchmark for the foreseeable future.” Professor John D. Stephens, Director of the Center for European Studies, University of North Carolina

“This volume is the definitive work on the politics of reform in Bismarckian welfare regimes. It features both rich empirical accounts of individual countries and penetrating new comparative analyses. Wonderfully rounded off by synthetic introductory and concluding chapters by Palier, this book is essential reading for any scholar interested in welfare reform – or indeed, in institutional and policy change more generally.” Kathleen Thelen, Ford Professor of Political Science, Massachusetts Institute of Technology


Acknowledgements
Prologue: What Does it Mean to Break with Bismarck? by Gøsta Esping-Andersen

2   A Social Insurance State Withers Away. Welfare State Reforms in Germany—Or: Attempts to Turn Around in a Cul-de-Sac by Karl Hinrichs

3   The Dualizations of the French Welfare System by Bruno Palier

4   Janus-Faced Developments in a Prototypical Bismarckian Welfare State: Welfare   Reforms in Austria since the 1970s by Herbert Obinger and Emmerich Tálos

5   Continental Welfare at a Crossroads: The Choice between Activation and Minimum Income Protection in Belgium and the Netherlands by Anton Hemerijck and Ive Marx

6   Italy: An Uncompleted Departure from Bismarck by Matteo Jessoula and Tiziana Alti

7   Defrosting the Spanish Welfare State: The Weight of Conservative Components by Ana Guillén

9   The Politics of Social Security Reforms in the Czech Republic, Hungary, Poland and Slovakia by Alfio Cerami

12   Whatever Happened to the Bismarckian Welfare State? From Labor Shedding to Employment-Friendly Reforms by Anton Hemerijck and Werner Eichhorst

Notes
Bibliography
About the Contributors
Index