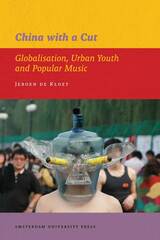 In the wake of intense globalisation and commercialisation in the 1990s, China saw the emergence of a vibrant popular culture. Drawing on sixteen years of research, Jeroen de Kloet explores the popular music industry in Beijing, Hong Kong and Shanghai, providing a fascinating history of its emergence and extensive audience analysis, while also exploring the effect of censorship on the music scene in China.China with a Cut pays particular attention to the dakou culture: so named after a cut nicked into the edge to render them unsellable, these illegally imported Western CDs still play most of the tracks. They also played a crucial role in the emergence of the new music and youth culture. De Kloet’s impressive study demonstrates how the young Chinese cope with the rapid economic and social changes in a period of intense globalisation, and offers a unique insight into the socio-cultural and political transformations of a rising global power.
AUTHOR BIOGRAPHY
[Jeroen de Kloet](https://www.uva.nl/profiel/k/l/b.j.dekloet/b.j.dekloet.html) is Professor at the Department of Media Studies, University of Amsterdam, the Netherlands, and affiliated to the School of Music and Recording Arts, Communication University of China. De Kloet’s publications cover Chinese popular music and youth cultures. His ERC project concerns creative practices in China.
REVIEWS

“How does sound become local in the global age? This is the question posed by Jeroen de Kloet. As much an ethnography of the subjectivities articulated to pop music practices as it is an interrogation of the assumptions of sinocentricity, this book constitutes a provocative statement of ‘Chineseness’ at the crossroads of contemporary media, everyday life, and geopolitics.”

“Jeroen de Kloet provides a rich and fascinating account of the myriad forms of rock in contemporary China. This book transformed my understanding of contemporary Chinese culture—and of rock music beyond Europe and North America.”

“An authoritative, scholarly and up-to-date account of an important and fascinating field of popular music which sets a new benchmark in global music studies.”