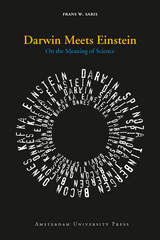 Why do humans engage in scientific research? For some, it’s simply a career. Others are drawn to science for its potential financial rewards. And still others do it out of competitiveness—to be the first in their field. But in Darwin Meets Einstein Frans W. Saris argues that in our postmodern times we have lost the meaning of science—that science is not about competition, nor about creating wealth, nor about the joy of discovery. Science is for survival—the survival of humans, the survival of life.

In this accessible collection of essays and columns, Saris brings together in conversation a number of great minds—Charles Darwin, Baruch Spinoza, Niko Tinbergen, Francis Bacon, Heike Kamerlingh Onnes, Franz Kafka, and Albert Einstein—to answer the question: why science? With selections like “Diary of a Physicist,” “The Scientific Life,” “The Mother of All Knowledge,” and “Science Through the Looking Glass of Literature,” Darwin Meets Einstein will entertain its readers and ultimately encourage them to reconsider the meaning—and the purpose—of science.

Frans W. Saris is professor of physics and dean of mathematics and natural sciences at the University of Leiden.